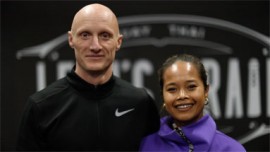 ...was 18 years old when he was given a choice. A martial art or continue to play football. His parents thought football was a more pleasant sport than kickboxing, but Robert thought otherwise. The day after his birthday, he signed up at Mejiro Gym in Amsterdam, where he went on to train under the guidance of Andre Mannaart for two years.

During those years, Robert was quite taken by Discovery Channel’s Fight Quest, a program in which the presenters traveled the world to practice various martial arts. More specifically: he was especially interested in the Thai martial art Muay Thai. A complete sport, training the whole body. The Art of the Eight Limbs. Because let's not forget those elbows!

He eventually went to live and train in Thailand for two years at - among others - Sityodtong, Pattaya. He fought fifteen professional matches, before returning to the Netherlands. Back in Amsterdam, he found a job as a doorman in the Red-Light District. A job that allowed him to return to Thailand for two months every year.

Nevertheless, a few years later, Robert shifted his attention from Muay Thai to other sports like CrossFit and Olympic weightlifting. But because blood is thicker than water, Robert returned to Thailand in 2015, this time not only rediscovering his love for Muay Thai, but also falling in love with Wanida, with whom he shas been sharing his life with for several years now.

Robert went on and taught classes at several gyms in Amsterdam, still going to Thailand every year to sharpen his techniques in different gyms. The idea formed and grew of starting an own Muay Thai gym, because in Dutch gyms the focus mainly lies on kickboxing.

And then the Corona pandemic struck. Gyms closed; lessons cancelled. A big knockdown, but he managed to get up after 8 seconds. And after much deliberation, Robert bought what must have been the last in The Netherlands available boxing dummy BOB (Body Opponent Bag). A great success. Finally, it was possible to offer trainings again, albeit under strict Corona rules. Photos and videos of Robert, BOB and his students along the Amstel river quickly became trending on social media.

After a successful summer, it was time for the next step: his own gym. A spacious place in a former car garage on the Joan Muyskenweg. A dream coming true. Not just for Robert, because as he says: “Muay Thai isn't just for me. Muay Thai is for everyone. People of all heights and all body types, no matter old or young: it's the ideal way to get fit, stay in good condition, lose weight, while getting sharper and becoming more focused.”